I have to apologize to RB for not getting this up sooner today. I don’t know why it didn’t post, but this looks like my kind of story. 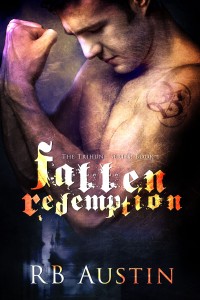 Fallen Redemption is on sale for only $.99 until July 27!

Cade committed himself to saving lives before he learned the full consequences of his life-altering decision. It wasn’t until he was tending his sick wife that he learned the enormity of what he’d done and he was unable to save her from the monster he had become. Consumed with guilt and praying for absolution, he threw himself into killing every Fallen he could find to save the humans he’d sworn to protect. But then Emma, deliciously mortal and completely forbidden, swept into his world, stirring an overpowering desire. Now he’s not only fighting soulless creatures, but also his inner cravings, trying to maintain his distance and continue on his path to forgiveness. He won’t lose control again and lose another love.

The cut was small and not deep, it would stop bleeding in a matter of minutes.
Blood seeped from the wound. It trickled down Sarah’s wrist and pooled in her upturned hand.
He froze.
Changes overcame his body. Uncontrollable. Unknown.
Breath quickened. Heart pounded as loud as a horse’s gallop. Sarah hadn’t awakened. The pain from her cut was insubstantial compared to the pain of her sickness.
The thick, crimson liquid flowing from the wound was anything but insubstantial to Caderyn. Still unable to move, his eyes hadn’t wavered from the blood. The tray left his hands and clattered to the ground. His knees buckled and he sank to the floor, bringing himself an inch from the cut. The scent of blood filled his nostrils. Consumed all thought. Sight. He wanted to close his eyes and savor the reverent aroma filling his senses. Something awakened inside of him.
Foreign.
Monstrous.
Wrong.
He was hungry, yet didn’t want food. Thirsty, but didn’t want to reach for a cup of water. Another drop of blood welled from the cut. A growl tore from his throat.
It was the switch and it had been thrown.
One moment he was himself. The monster inside separate. Next the wall between the two vanished. He was the Behnshma. His humanity gone. Another growl. It echoed around the house. Filled his ears.
He was ravenous. The fact he hadn’t eaten in a little over a week ached his empty belly and burned his dry, parched throat. There were two pricks of pain in his top gum. Finger in his mouth, he found two long, sharp as knives, teeth. Like Elias. Like the wolves in the forest when they tore into a deer carcass. Their muzzles bloody, meat dangling from their mouths. Blood.
He knew what he wanted to do, what his body demanded he do. Caderyn licked his lips and his tongue nicked an elongated tooth. His own blood melted decadently over his tongue. A flood of senses erupted. Never had he tasted anything this wonderful. His mouth zinged with flavor. The blood coated his throat. He’d been dying of thirst his whole life but hadn’t known it. Warmth spread through his body.
His hands shook as he brought them to Sarah’s arm. Grasping her wrist and forearm he leaned toward the blood. Inch by inch. He was a magnet and her arm was the polar opposite.
Her inaudible yelp of fright permeated through the rushing noise in his ears. He tore his eyes away and met her wide-eyed startled ones.
Stop.
Fear was an acrid, burning stench in his nostrils. Her thoughts a chaotic jumble weaving through his mind. She tried to move her lethargic limbs. Tried to escape. To break free.
He flexed his hands, squeezing her arm as his gaze trailed from the vein in her neck to the one in her wrist right below the cut. The blood slowed and the edges of the wound begun to dry. The tangy, copper scent of the fresh liquid underneath her skin reached his nose. Caderyn listened to it pass through her veins. Faster and faster.
Ignoring his wife’s futile attempts to escape, he leaned closer and inhaled. A growl erupted from his throat. He bent. Licked the wound. Groaned. His cock hardened.
Sarah, panicked now, tried to yank her arm free. It was the most she’d moved in days. Growling, like a dog with his bone, he held down her upper arm and her squirming hand. Pushed it back until her forearm bowed, and the cut extended to him like a present.
Caderyn. Please. I beg you.
He was hurting her arm. Scaring her. She was begging.
Flicking his tongue over her wrist, he caught another drop of the thick liquid gold. Then another and another. It wasn’t enough. He bared his teeth, striking fast to sink them deep into her wrist. She gave a weak jerk. Caderyn drew her blood into his mouth with long pulls. His cock jerked and warmth spread inside his breeches. There was no stopping. Her struggles to escape were an annoying insect buzzing around the room. The pleas to stop were shouts in his head. Both were easy to ignore. Sarah ceased to struggle.
He was killing her.
He couldn’t stop.
And didn’t stop until she was dead.

Fallen Redemption is on sale for only $.99 until July 27!