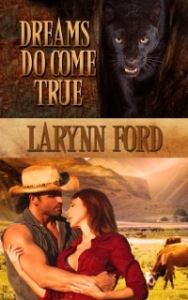 Book 2 in the Dream Trilogy

The vicious slaughter of cattle brings Lynzi Lancaster and her fiancé Layne Brady, a Fae raised in the human world, to the aid of his human parents. A neighbor with a grudge has returned to the area to settle a score.

Lynzi is only mildly shocked to find the tall tales her granddaddy told so many years ago about black panthers roaming the woods near their home were not only true but also had a twist, those panthers were two natured . . . werepanthers.

The renegade panther believes Lynzi is a witch and threatens her life when Fae magic is performed near by. Now, it’s up to Lynzi and Layne to bring down the big cats and keep her alive.

I drew the truck door as close to me as I could get it and waited for the perfect moment. I shoved it open with all the force I had to meet my attacker head on. With a loud thud, she bounced back, and fell hard on her rump.

Thinking that reality check would take some of the fight out of her, I stepped from behind the door. It was only hopeful thinking though since she scrambled to her feet and came at me a second time. She made contact this time by clinching both hands around my neck all the while chanting some strange words. Gasping for air, I grabbed hold of her wrists and broke the hold as I spotted Boone tearing out the back door toward us. She swung a fist, and I reached up with my forearm to block the blow.

A familiar hand latched onto my waist and tugged me out of the reach of the crazed woman. The loud smack I heard but did not see delivered caused her to fly backward and land on her backside again. I straightened myself, my hands clinched into tight fists. She had to believe I had delivered the blow. Layne’s identity could never be discovered.

Boone took his protective stance in front of me. “Mena, what are you doing here? Ms. Lynzi didn’t kill Del. He was executed by panther law for everything he did to me and Jesse and Mama.”

The crazy witch resembled a human crab scooting backward on her hands and feet, trying to stand, and regain her senses. I could almost see the steam coming from her ears she was so mad.

“You didn’t lift a finger to help poor Del and now you’ve thrown in with this witch. You will pay for what you did, Boone Weaver.” She raised her hand and started to speak in riddles again as if to cast another spell of some sort on Boone.

I moved around Boone with my shadow still covering my back. “This is your only warning, Mena. Leave this place and leave us in peace. Keep messing with me and my family and I will come after you.” I raised my arm with my fist still clinched to emphasize my point. Layne accentuated my declaration with a gust of wind powerful enough to knock her on her butt, yet again.

“I’ll get you. I don’t know what kind of witch you are but I’ll get you. And Boone, you only tasted the beginning. You’ll wish you were dead before I’m done with you. Careful what you dream, it might come true.” She scrambled to her feet and ran around the corner of the house and to the car she had left parked out on the side of the road.

“Lynzi. Are you hurt?” Layne was hovering again. “Ms. Lynzi, did she hurt you?” Boone, too. I blew out a breath. “Whew. You both worry too much.

I’m fine. Not a hair out of place.” I shook my ponytail. “Which is more than I can say for Mena.” A confident grin spread across my face as I raised my left fist and revealed my prize. Several dozen strands of frizzy, bleached blond hair had been captured in my scuffle with the witch. “Ooo, she’s in bad need of a touch up, too. Gray roots.” I made a face as I examined my reward and wondered if we now had everything we needed to do the job of eliminating Mena from our lives.

Layne’s hands clasped onto my waist, he lifted, and spun me around in mid air. After my feet were back on the ground, I propped my hands on my hips. “Layne Brady, what if someone saw that? People don’t just fly around their backyards on their own. At least not here.”

“Hey, you already got the reputation as a scary ol’ witch, so why not?” He chuckled as he took my hand and led me into the house.

“Sounds reasonable to me,” Boone chimed in.

“You two best be careful with those smart mouths. I’ll take my broomstick to the both of you.”